The Bible study went great last Thursday. It was a real blessing.

On Saturday Liz and I drove to the coast to preach at our João Pessoa main church's 22nd anniversary service (photo below). The style of the church is a bit old fashioned and the service a bit uncrisp - but all went well and the sermon flowed nicely. We slept there the night and got back to Patos about 1.30pm on the Sunday.

Hence yesterday afternoon was very pressured as I had to prepare things I don't usually have to do as your digital projector man is away - but we just about made it. The service went beautifully and visiting speaker pastor Angelo from Soledade preached. The leading of the meeting was handled between Philip and me.

Today I've been doing lots of communications work with all the churches.

In the morning I have two young men here from Tearfund who want to visit Green Pastures - I also have a new university teacher wanting to go there on Friday with 15 students - and on Saturday morning I have another visitor there from São Paulo. Never a dull moment! The brother on the Saturday will speak at the service at Green Pastures on Saturday night and in Patos on Sunday.
Posted by Brazil as I see it and live it at 6:24 pm No comments:

The Bible study is ready for tonight and my sermon for Saturday in João Pessoa is also prepared. Liz and I will be travelling to the coast on the Saturday and coming back on Sunday in time for the evening service in Patos. I will lead the service here but Pastor Angelo from our Soledade service will preach.

Liz is at the supermarket buying the week's groceries for the first time since her accident. She was driven there as she can't drive yet, but is able to get around fine and do the shopping at a steady pace.

Sacha is on a Cambridge English language course for teachers in São Paulo and has suffered a lot with the cold there. Deborah is at Fortaleza at a teacher's conference. Philip & family are on holiday this week in Natal.

We are putting in a cattle grid at the entrance to Green Pastures which should be finished next week. This is because when we have camps and events on, there is a lot off tooing and froing, and the tendency is for the gate to be left open. This is dangerous for our nature reserve should cows, goats, donkeys etc. get in, so we are taking the bull by the horns so to speak. The gate will just be shut at night.
Posted by Brazil as I see it and live it at 2:51 pm No comments:

This morning at Green Pastures I had the greatest shock to find a Wild Cat (Puma Yagouroundi) in one of our wide mouthed wells which only has water in the deeper central part and is dry now round the edges. The well is 7 metres deep (21 feet). I can only presume that it fell in there whilst hunting something and now couldn't get out. The problem we faced was how to get it out? Normally it is a very wild creature, but it was just quietly looking up at Tarcísio and I as it had no choice (see photo). We eventually managed to lasso it with a long rope and haul it to freedom, when it went completely ferociously beserk, shaking free of the rope and running at great speed into the bush. It was quite an experience! 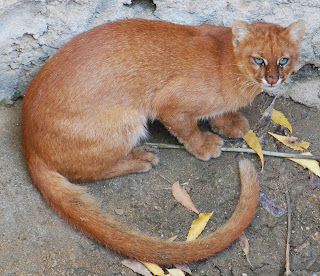 Services over the weekend went great. I preached at Picotes on the Saturday. It was a lovely service. Photos below.

The Sunday service went very well in Patos too. It was a really blessed time with a full church. Today I have had a good meeting with our deaf pastor Luiz Carlos and it is good to sense how well that section of the work with the deaf is going. PTL!
Posted by Brazil as I see it and live it at 8:54 pm No comments:

Just off to the Bible study which will be on ministries in and with the body of Christ. I have half prepared my Sunday sermon too on Psalm 19. I have to prepare to preach at Picotes too on Saturday. Help! Value your prayers.
Posted by Brazil as I see it and live it at 7:10 pm No comments:

How beautiful to receive this video from a deaf couple, Adalberto & Jussara, who are members of our Patos church. They bought a food hamper and gave it to a family they found in need! Action speaks louder than signs!


Last night we had an excellent meeting with the singles/divorced/one-parent family fellowship. I am now preparing for tonight's Bible study on ministry in and with the whole body of Christ.
Posted by Brazil as I see it and live it at 10:53 am No comments:

Just winding down for the night with the Patos Youth Leadership team's meeting with Liz and I having just ended. It was very good. Philip leads the team with with two assistant leaders Brenda and Rayla. They are doing a great job especially with the younger youth. We discussed one or two problems which have arisen with some rebellious older ones. May the Lord give us wisdom on how to handle this.

It was lovely to see how people reacted worldwide to the tribute we did to Liz's Dad over the weekend with Saturday having been the centenary of his birth. About 3,500 people responded to the tribute one way or another mostly via facebook.
Posted by Brazil as I see it and live it at 10:11 pm No comments:

Liz and I went to Soledade on Saturday and had a meeting with the church members chatting over different aspects of the work and ending up with the reelection of the pastor (Angelo) for another 5 year mandate). I think our system of mandates is good as it stops any eventually lazy leaders getting embedded into a job or sort of taking the church over. Most mandates get renewed but the trigger is there if necessary. Angelo's mandate was renewed. See below the photo from the meeting. On the way there and back Liz and I had our usual business meetings to make the most of the journies.

On Sunday morning Liz was back teaching her Sunday School class for the first time since her accident. Then at night the service was lovely. The sermon went great on "All you need is love".

Today Liz has been at the Care Centre with the Care Centre Doctor Luiz caring for extremely poor people linked to the battered wives project we run in a Patos slum.
Posted by Brazil as I see it and live it at 8:56 pm No comments:

The Centenary of Frank Dyer's Birth 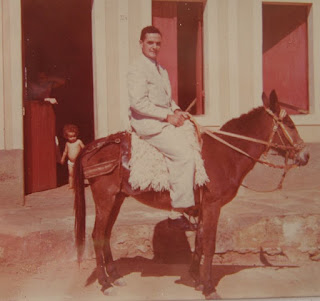 Today is the centenary of EAB’s late pioneer missionary and ex-Field Director from 1971-1987: Frank Dyer. Born in the New Forest, England on the 9th of July, 1916 he went to Brazil to work with EAB in March 1949 where he pastored the Princesa Isabel and Patos churches. It was in the latter town that Frank was called to his reward in November, 1987.

Pastor Frank Dyer also travelled extensively evangelizing the interior hinterlands of Pernambuco and Paraíba States in northeastern Brazil – often travelling on a mule, at other times on top of old lorries laden with cotton and eventually in a jeep. He was a discreet man who rarely spoke about his medal for bravery received from the hands of King George VI for having seriously risked his own life to save from certain death his wounded comrades.

Above all else Frank Dyer was a man faithful to God’s call on his life, who underwent stonings and threats, without complaining, simply because he was a Christian and a preacher of the Gospel. Perhaps his greatest legacy was his integrity.

Today his daughter Elizabeth, who travelled with her father far and wide in the interior from the age of six, is who continues in her father’s footsteps living and preaching the Gospel. EAB today praises God for exemplary servants of Christ like Frank Dyer who constitute an important part of our history. Elizabeth beamed from ear to ear in 2014 when we put on a new roof and completely overhauled the church building in Patos built over 50 years earlier. All the roofing timbers were found to be in perfect order, straight and aligned. Frank Dyer had been the carpenter and the state of the timber says much about his life and ministry. We give God the glory this day!
Posted by Brazil as I see it and live it at 12:00 am No comments:

Rushed off our feet!

On Saturday Liz and I went and preached up in the mountains at Juru. It was a great service. It was the 32nd anniversary and we've been involved, of course, since the start - so it's great to see the work growing and going so well. PTL!

On Sunday back in Patos was the communion service and I preached again. The church was packed out. The sermon went very well finishing off Acts 19 still in Paul's 3rd missionary journey.

Yesterday I produced and dispatched the latest EAB Nutshell Update amongst other things. Today I have been up to Teixeira in the mountains for an important meeting concerning the Jabre Peak battle to save the environment there. A new snake has just been found there which I can't give details on till it's all duly registered etc. This is utterly fantastic. A never previously known poisonous species of snake. Now I must rush aas I have to take the Bible study at church.
Posted by Brazil as I see it and live it at 6:17 pm No comments:

I function as the Patos Bible College Counsellor these days and the leaders asked for a meeting with me this afternoon. It went very well. PTL! We had a wide-ranging discussion and I gave a list of suggestions to them for the way forward. The College completes its 20th year this year. Please remember it in prayer.

Please pray for Liz and I as we travel up the mountain to preach at Juru tomorrow and back in Patos on the Sunday.

Liz is now allowed to walk very slowly without crutches indoors, but must use them when she goes to church etc. The physiotherapist says Liz needs to walk like she's recently had surgery very carefully. Liz gets very tired with all this but is doing very well indeed. PTL!

Well done again to Wales in the European Cup. Great team spirit and excellent football!
Posted by Brazil as I see it and live it at 6:41 pm No comments:

Brazil as I see it and live it